If it were possible to encapsulate an era in a single object, the classic cars of the 1930s would make a valiant attempt. At no other time in our history has car design been so greatly influenced by the fashion of the day. And what a fashion! Art Deco style is probably one of the most recognisable trends of the last century and is echoed in many surviving examples of that decade, including architecture, jewellery and furniture, as well as cars. 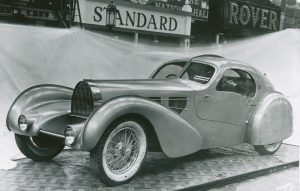 But where did Art Deco come from? The austerity of the period following WW1 saw a reeling in of the flamboyant Art Nouveau style as the Great Depression struck. Extravagance was replaced with simplicity and functionality.

Industrial output fell and unemployment rose but not everyone was struggling; the well-to-do still required an outlet for their excessive budgets. Rather than squander their fortunes, they invested in functional art – the motor car.

At the time, motorised vehicles were still a rare sight on the roads, so any car was pretty much viewed as a phenomenon. To differentiate from the ‘ordinary’ and offer a truly eye-catching car to their moneyed customers, manufacturers such as Bugatti, Delahaye, Voisin and Delage specifically designed and produced motors that were as glamorous as the Hollywood movies that were taking hold of social culture. The result was a collection of beautiful driving machines that most people could only dream of owning.

Art Deco designs used geometric shapes and clean lines in a break from the swathes of floral themes and excessive decoration that was common prior to the war. This trend was echoed in car design: though conservative, the bodywork retained some flair with long bonnets and swooping wheel arches which added to the aerodynamic properties of this new automotive generation.

It wasn’t just the fashion of the day that contributed to Art Deco car design. The testing of airships in wind tunnels provided data to support the benefits of reduced air resistance in all forms of transport. When introduced to the roads, these highly streamlined shapes glided along, providing the illusion of excessive speed, even when at a standstill.

Power To The People

The craftsmanship required to create this new style of vehicle was helped by the advances in production technology that war had necessitated. New types of steel could be pressed into different shapes to accommodate sleeker, smoother silhouettes, moving away from the boxy models of Ford et al. that dominated the early 20th century.

Eager to give Joe Public the chance to be like the rich and famous, and appreciate the benefits of aerodynamics, there were attempts by mainstream manufacturers to reduce air resistance in some general release models. However, Chrysler’s launch of the Airflow – with a vee-shaped 2-panelled windscreen and a streamlined body – was more of a damp squib than a big hit when the market failed to appreciate the advantages of the styling. Manufacturers persisted with the softer design, introducing the likes of the low-priced Lincoln Zephyr in 1936 which was more successful than the Airflow. It wasn’t just the Zephyr’s exterior that attracted buyers, under the bonnet the Zephyr’s V-12 engine was a triumph too. It was this engine that was chosen for the original Atalanta car.

Years later, the curved design and forward mounted engine allowing for better weight distribution would be commonplace on British roads. The Chrysler Airflow was just 10 years before its time!

So for the 1930s at least, Art Deco belonged to the cars of the jet-setters, to be created by craft manufacturers and admired from a distance. It was common in France, in particular, for one constructor to supply a chassis and engine while another would build the body and interior. The result was massive, though highly impractical, land ships built to the highest specification utilising inlaid woods, mother of pearl and exotic materials such as shark and ostrich skin.

Most of these Streamline Moderne vehicles were too big to gain any benefit from a highly curved body shape but no one cared as long as they achieved their attention-seeking purpose. 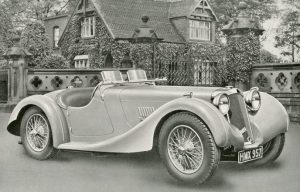 Fortunately, the virtues of streamlining did not go completely unappreciated by everyone. Engineers applying their talents to sports car design combined this aquiline body shape with a lightweight chassis and powerful engine to gain racing benefits. None more so than Atalanta Motors Ltd who, towards the end of the decade was producing tailor-made, contemporary British sports cars that incorporated these aeronautical advances.

Not only did the Atalanta cars possess the beautiful curved lines of the Art Deco era, they also gifted their drivers with excellent handling and performance, claiming titles in rallies and hill climbs prior to the outbreak of WW2. If capability and style weren’t enough, Atalanta also equipped its motors with independent suspension on all four wheels, a unique feature at the time and one which was welcomed by those seeking comfort as well as speed.

Fast forward 80 years and it’s hard to imagine a day without cars – glamorous or otherwise. Amongst the many millions that we take for granted, the works of art of the interwar period still rightly attract our attention with modern pretenders continuing to compete for the most aerodynamic, the lightest, the most powerful.

Atalanta Motors allows you to discover the best of both worlds – a new vintage British sports car, built with the same care, attention and principles of the Art Deco era while utilising the latest technology and materials where appropriate.

To put yourself behind the wheel of an exhilarating yet comfortable ride that provides a taste of one of the most important times in British motoring history, with the practicality of modern motoring, contact us today.