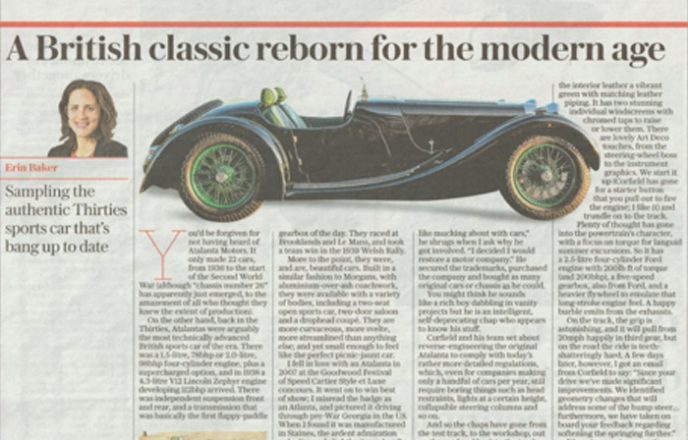 The Telegraph provides its opinion on the new Atalanta sports car, compared to the original 1930s Atalanta. Discover the revival of a modern British classic car.

You’d be forgiven for not having heard of Atalanta Motors. It only made 22 cars, from 1936 to the start of the Second World War (although “chassis number 26” has apparently just emerged, to the amazement of all who thought they knew the extent of production).

On the other hand, back in the Thirties, Atalantas were arguably the most technically advanced British sports car of the era. There was a 1.5-litre, 78bhp or 2.0-litre, 98bhp four-cylinder engine, plus a supercharged option, and in 1938 a 4.3-litre V12 Lincoln Zephyr engine developing 112bhp arrived.

There was independent suspension front and rear, and a transmission that was basically the first flappy-paddle gearbox of the day. They raced at Brooklands and Le Mans, and took a team win in the 1939 Welsh Rally.

More to the point, they were, and are, beautiful cars. Built in a similar fashion to Morgans, with aluminium-over-ash coachwork, they were available with a variety of bodies, including a two-seat open sports car, two-door saloon and a drophead coupé. They are more curvaceous, more svelte, more streamlined than anything else; and yet small enough to feel like the perfect picnic-jaunt car.

I fell in love with an Atalanta in 2007 at the Goodwood Festival of Speed Cartier et Luxe concours d’élégance. It went on to win best of show; I misread the badge as an Atlanta, and pictured it driving through pre-War Georgia in the US. When I found it was manufactured in Staines, the ardent admiration only dimmed slightly; it was hardly a suburban flash in the pan, with Frazer Nash’s chief engineer and AC Bertelli from Aston Martin involved in the set-up.

But still, these cars are extremely rare. Until now. A new gentleman racer has taken up the Atalanta cause: Martyn Corfield.

he shrugs when I ask why he got involved. “I decided I would restore a motor company.” He secured the trademarks, purchased the company and bought as many original cars or chassis as he could.

You might think he sounds like a rich boy dabbling in vanity projects but he is an intelligent, self-deprecating chap who appears to know his stuff.

Corfield and his team have set about reverse-engineering the original Atalanta to comply with today’s more detailed regulations, which, even for firms making only a few cars, still need boring things such as head restraints, lights at a certain height, collapsible steering columns and so on.

And so the chaps have gone from the test track, to the workshop, out on the road and back to the track, many times over.

I meet Corfield and the car at Bicester Heritage, which is on its way to becoming the classic-car centre for Britain. The new Atalanta is a perfect embodiment of the two-seat open sports car. The paintwork is a deep black lustre, the interior leather a vibrant green with matching leather piping. It has two stunning individual windscreens with chromed taps to raise or lower them. There are lovely Art Deco touches, from the steering-wheel boss to the instrument graphics.

We start it up (Corfield has gone for a starter button that you pull out to fire the engine; I like it) and trundle on to the track.

Plenty of thought has gone into the character of the power-train, with a focus on torque for languid summer excursions. So we have a 2.5-litre four-cylinder Ford engine with 200lb ft of torque (and 200bhp), a five-speed gearbox, also from Ford, and a heavier flywheel to emulate that long-stroke feel. A happy burble emits from the exhausts.

On the track, the grip is astonishing, and it will pull from 20mph happily in third gear, but on the road the ride is teeth-shatteringly hard. A few days later, however, I got an email from Corfield to say:

Since your drive we’ve made significant improvements. We identified geometry changes that will address some of the bump steer… furthermore, we have taken on board your feedback regarding softening the springing further.

It’s an impressive operation, with three orders under way and five cars due out by the end of next year. Prices are from £149,900, but you’ll never come across a more hand-built, customised car, with Britishness positively dripping from the tailpipes. If only I had the money.

Take your first steps to driving your own modern British classic sports car by commissioning your very own Atalanta car today!  You can do this by either calling 01869 242200 to make an appointment at our Bicester workshop, or complete the commission enquiry form here.

Submit
The password is incorrect. Please check and try again.